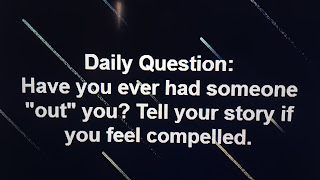 Daily Question:
Have you ever had someone "out" you?
Tell your story if you feel compelled.

Me: "out"-ing can be anything, like gender, sexuality, or if you're a superhero, or if you were trying to stay anonymous about something.

Friend 1: Yeah, at university. I was in that stage where I was out in some places and not others. And it turned out someone I knew from my trans support group was also friends with a classmate I'd been friendly with. I found the two of them in the dining hall on campus and the one called me "Friend 1" and confirmed my pronouns with me, right in front of the classmate who had only ever known me by my former name. It was awkward but I rolled with it, and nothing bad happened.

Friend 2: I actually told this story for the first time in yeeeears just the other day, so Ill share it again in a nut shell.

It was middle school and I knew for years I was at least a little bit gay by then, but my peers didnt know. I was hanging out with older kids and I mean I was drinking and doing drugs a LOT (I got my party years out young, dont you judge!!!!! Haha) So I was already pretty far removed from my peers, but I had a friend that I had a crush on (a girl, obvi) and I told her (total denial) and she told her friend, who told her friend, WHO TOLD EVERYONE!!!!!! It was awful. Another friend I had, we shared all our classes and lunch together, was very religious- and immediately stopped being my friend. That day, everyone was just starring at me and talking about me and it was a slow but sure build of anger for me all day... When I saw her (girl who outed me) in the hall, everything started to tremble and it felt like I had vertigo, everything was blurry and in the center it was black (my vision) if it wasnt for anoooother friend (I guess I had more friends in hindsight) I honestly might have blacked out and really harmed this girl....I was FURIOUS. And embarrassed. Im not at ALL a violent person, though back then was a bit of a different story. I was constantly surprising myself with awful decisions.

I didnt see that girl again very much, only in passing, though we continued to go to school together for 2 more years after that. She actually died of a heroin overdose a few years ago... Which I find to be the most depressing part of the story. Lifes crazy.

Wasn’t fun having my mom tell the entire family I wasn’t a virgin anymore and I was unmarried... it was as if I was gossip fodder

Friend 4: Right after I had a positive pregnancy test, my daughter immediately went and told her father.

Friend 5: One time, my daughter was walking into the house w a friend and said, “this is my mom. She’s gender fluid.” Weird bc I’d never applied that term to myself, just had talks about how we experience gender differently. I mean, I suppose it’s true, but ... awkward moment to be sure.

I’ve had friends out me about mental health stuff many times by mentioning my dx, which I keep low key private, in front of people. Like I talk very openly about symptoms, but I’m pretty private about the specific diagnosis bc it can freak people out or worse, make me vulnerable in very uncomfortable ways bc I forget things sometimes and rely on people whom I know I can trust to help me keep my narrative straight in those moments. If someone lies about something I forgot or missed bc I was checked out, it can be really disorienting for me, and people have done it bc they thought it was funny, e.g. them: “remember that time you [wacky story]?”

Me: “oh my god! I did that?” Them: “no, I was just joking!” Me: 🙄😩🤯 ugh. So it’s very annoying and tbh, scary, when people out me regarding that specific thing, and it’s happened many times bc I used to be a bit too trusting about whom I told and people naturally find it “fascinating” bc it’s uncommon and the forgetfulness factor can be amusing to them. Sigh. It’s not amusing to me.

Friend 6: I learned years ago that you're never as "in the closet" as you think. A few years ago, I had an 8th grade student yelling my pen name as he went by my classroom (I'm out as a lesbian--having my kids go to school in my building will make sure everybody knows. Parents with a problem request for their kids to not be in my class, which is fine with me.) I complained to my VP, who confronted the kid. The VP came back to me and said the kid denied it. I met with the VP and the kid. Without beating around the bush or presuming innocence--it's not a court of law--I told him 1) my pen name was not a secret 2) he'd crossed the line between my professional and personal life and 3) he was going to immediately stop being disrespectful. He apologized and never did it again. (Also, he started doing his work in my class.) The VP is now the principal, and he has mad respect for my no-nonsense attitude. I laugh in the fact of being outed. Come at me, bro. You're going to lose.

Friend 7: I worked in a very conservative work environment, but myself very liberal, and just kept a low profile. My "adopted" mom was HR admin, also very liberal. I sent her an email with an environmental link about the Pacific plastic patch the size of Texas, which she then forwarded to a bunch of people in the company, saying this is why we must stop using plastic. Since then I've come to embrace my environmental activism more, trying to educate and influence people however I can. At my work I eventually gave my presentation on The Challenge of Being Green to my department, and as a lunchtime lecture, which is not kind to the corporate world, so that was sticking my neck out a bit, considering I was in a corporate culture.

Me: I am glad there are not just negative/awkward outings! :)

Friend 8: I never have but people tried to out me as things I wasn’t. I tend to be honest about myself as long as I’m aware of what I feel or believe, but some folks like to assume and then use that to try to discredit me. It’s silly.

Me: you've been outed as peaceful?

Friend 9: Haha! Her name was Peace and she OUTED me!
It was in 8th or 9th grade and for a few years my folks (scrimped &
saved &) sent me to a private, all-girl school. On Sundays we were
forced to go to church.I and a friend (who shall remain nameless) as
a protest (y'unnerstand) had these long coats, so we went Buck
Nekkid (!) under our coats, that is.

Well, anyway, a couple days after, Peace ratted us out! It was
at the dining room table and the House-mother was not present. But
for YEARS I felt regret over the fact that I lied!

When Peace told everyone at the table that (? &) I went to
church naked, I denied it - I still remember the look on her face.
smh - Ohhh welll. LOL
And then the cock crew trois X
at July 05, 2020