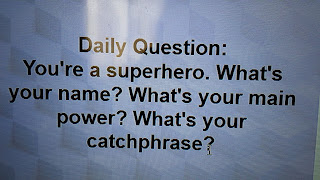 Friend 1: Name: Bikerman Power: outlive my enemies. Phrase: let us drink whiskey from the skulls of our enemies
Me: Love it!
Now do you just keep making enemies so you can stay alive? :)
Friend 1: works for me

Friend 2: Mystic Queen
Psychic powers Shapeshifting Regeneration
I didn't do anything.
I didnt say anything.
Yeah, they think so *wink*
Me: that sounds pretty badass. :)
Friend 2: thanks

Friend 5: Name: Dumpster Femme
Power: Up-Cycle -- ability to take used up/trash/broken items and improve them into something useful once more.
Catchphrase: "Sometimes you have to throw the whole man away."
Bonus! Sidekicks are two sentient animals capable of speech: an opossum named Daisy, and a raccoon named Mordecai.
Me: My friend Krista would like you as a superhero!
Friend 6: I think we need to team up, because that is very much what
I had in mind when I saw this question.

Friend 7: Name: Apathetic Avenger
Superpower: Ability to be non-engaged no matter how much it matters to me.
Catch phrase: Hard pass!

Friend 8: My name is Friend 8. Superpower: I bumble through life half-clueless, but with incredible luck. Catchphrase: Meh, what do you expect?
Me: Luck is definitely a superpower
Friend 8: Not complaining, but luck has seemed to follow me in my
recovery from OCD, in ways that make me feel guilty to be me while
so many people struggle with mental illness and life in general. I
facilitate groups for people with all kinds of mental illness, and
I'm having to learn to curb my enthusiasm for life sometimes as to
not diminish their suffering.

Friend 9: Chance.
Power: being extremely sneaky
Phrase: shit shit shit shit
Me: i love this. you're like swiper, but more swears

Friend 10: Have you been planted by the supervillain to use the question of the day to trick us all into giving away our secret identities?
Friend 11, Are you behind all this?
Haha
Me: *Dexter GIF*
Friend 11: one assumes that I don't already know.

Friend 6: Since Friend 5 is the Dumpster Femme of the Upcycling Force and it makes little sense to duplicate, I’ll be Cornucopia, around whom no one ever goes hungry or thirsty. Any amount of food or water is enough to sustain my team and anyone we mean to protect. I can also address minor ailments that can be treated with herbs and other plants, to prevent them from becoming larger issues. My catch phrase is “I dare you to dehydrate.”
Friend 5: I like our combo -- together we're Sus-team-ability ❤
Friend 6: I suppose the flip side to this ability could come in
handy in any sort of detering-the-bad-guys situation. I could make them
immediately dying of thirst/hunger and debilitatedly weak.

Friend 13: Peacemaking Man, whose powers are to bring peace through mediation and conflict resolution, and the ability to have people listen to each other towards a common goal. My catchphrase would be: let's see if we can work this out into a reasonable solution... now, let's begin with you; what do you have to say?"

Friend 11: While y'all here trying to be superheroes, I'm over here with soda in a wine glass, being a cross of Cersei and Lex Luthor in a tower bought with taxpayers' money.
at July 02, 2020