POST: So... surprise cat this morning when I got home. They are lovely. I wasn't comfortable looking up their dress to determine genitals and they were too afraid to show off. 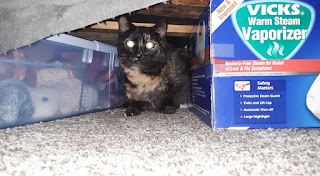 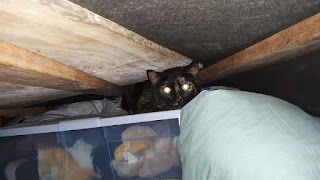 (I have more photos, but I need to find them)
ME: I know it looks like I am strangling the kitty, but they were purring. i needed multiple shots because the phone camera wasnt cooperating or the cat wasnt.

Friend 2: Cats...cooperating....? Hahahahahaha!
Friend 3: Yes...I’m a cat person and can attest to the fact that “cooperating” is not a word that’s in the kitty dictionary.
Me: i had to distract surprise cat with tapping for the third pic

Friend 4: Unless “they” are a genetic anomaly, they are a she. Almost all torties (tortoise shell cats) are females. I’m glad she’s found a friend!
Me: she found her friends back outside. i started reacting allergicly almost immediately. :(
Me: kitty DID feel female even without checking definitively
Friend 4: Does she have a home? Where did she come from?
Me: i remember seeing her outside. she probably isnt feral, she was afraid of me, but didnt fight too hard when i finally got a hold of her.
Friend 4: she isn’t feral if you can get a hold of her.
Friend 5: Our neighborhood has dozens of community cats that rarely stay put for a head pat but aren’t feral either.
Person: If i was aloud i would come pick her up but after we had to give up our last 2 we dont want anymore atm

Friend 6: Torties are girls. Like my Sophy. (photo included in original post, Tortie cat)
at April 21, 2020 No comments:

An Adrien-Brody-type wearing faded fatigues has his canvas duffel bag over his shoulder and is about to strike out on his own. He walks out of the barracks, grabs a black stocked military rifle. As he heads towards what appears to be a barren wasteland his commanding officer stops him.

Suddenly there's a noise and the man drops his canvas bag and aims the rifle. He takes a shot and you hear something crack, like a clay pigeon. He takes another shot, same deal. He takes a third shot...

Follow the bullet into the sky. See it pass a white drone.

Something happens and a man riding a four-winged glider carrying four other men inside suddenly goes limp and starts sliding off of one of the front wings. This disrupts the glider's equilibrium. He barely grips as he slides off of the wing into oblivion.

See the scene again, the white drone is what killed the man and the bullet whizzed right by. A red trail clings to the glider wing in the man's stead. Before he drops off, he weakly says, "guide her down" and loses his grip, Gandalf-v-Balrog-style.

The four men inside look at each other with terror. It is me, Patrice O'neil (RIP), and a couple other whites, 2009 Jay Harrington, and a young Michael J. Fox.

Me and MJF each grab the emergency steering cords. We successfully guide the glider back to level. Then the four of us figure a water landing will be better and figure out how to guide the plane towards the bridge close by.

We approach the water at high speed. We are headed into a controlled shallow dive. Once we hit the ground, the bottom of the glider tears off and we skim along the water, weighing down the glider mostly as it comes to a stop. Unfortunately, Jay is injured and as we try to get him into the glider so we can get ourselves to the bridge, he slips off and sinks into the black water.

We lament loudly, but we need to get to the bridge. We push the glider toward the bridge. There's a wall where we can climb up and to some rocks and eventually to a busy road. I remember I have ¥170 for each of us for moments like these where the average misadventure might only cost ¥70 (wtf brain?!).

It's difficult to get up to the stairs that would take us up to where we could get help, but we do. I see cars whipping by on the freeway, but also bikes and scooters. The bridge doesn't look anything like I know of.

Patrice is sweating profusely. MJF is more rational and says we need to get a cab. None of us have a phone, but for some reason I now have a theatre sized cup of lemonade. We look at the expanse between where we are and the quick freeway. I hand the lemonade to Patrice.