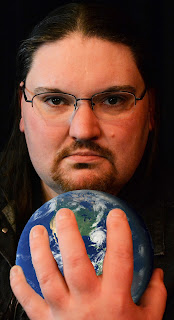 I don't know how it happened. I just found out about it a few hours ago.

I won't flap his business around, but he shared with me some of his issues. I don't know how it happened. I feel like I should.

I feel like a failure as a friend. I feel like I should have reached out to hang for nonpoet reasons more often. I wished he had some to my party a couple weekends ago so I could have seen him before I left for China.

A friend said, 'adult friendships are hard' and that's right, but I could have made more of an effort.

If you looked up 'lonely talker' in the dictionary, his face would be there. I only recently got Zen about that though and it only annoyed me when I was wearing shorts out in winter or in the summer when there were bugs biting.

Other times, it was a joy to hear him speak. He got so passionate about his next release or the events he wanted to put together or attend. He was still so passionate, even when he realized the Stark County scene was stagnating.

I think the last time I saw him was a few months ago at one of the more recent sWord Fight showcases. Since then we discussed briefly getting his MOV (My Own Venue) project off the ground. He'd found a place in Akron and since my day job is with real estate he wanted to use my broker and for me to get a kickback. When/if I get back from China, maybe I'll do something in that respect and call it "Vertigo's" or something. Maybe that's just me being dumb.

Maybe I'll run for Emperor of the World and dedicate my win to him. 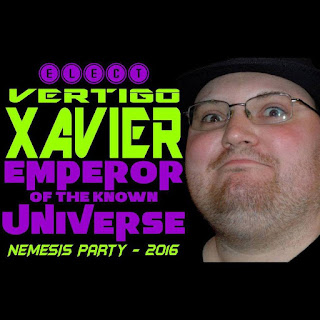 I keep thinking of people who might want to know, but who might not find out without being told. I tagged a shit load of people. Texted a few. Called one. I probably won't get them all. There were so many that he touched.

I keep thinking about his storage unit and how people are going to parse that out.

There was a tornado a little bit ago. Had to squash that shit.

I keep thinking about having a memorial open mic get together. He's got so many books to liquidate, the money should go to his family or something. Or maybe someone can somehow pull together grants for a scholarship, but I don't know how any of that shit works.

People keep calling him by his not-preferred name and it pisses me off, even though they didn't know him as VX and it's not my place to be pissed off on his behalf if he'd come to acceptance about it.

I keep looking at the first message and how vague it is. I want to know everything about his last moments, but that will probably be a mystery to me until I see his family. I only ever met one of his sisters, I think. I may have heard his dad in another room at one point. I am clueless.

It has taken me about an hour to write this much. I need to do something away from social media.

I haven’t written in so long, I decided what I needed right now was a mental dump onto a white (red) screen and throw it up to the blog to let people know what’s going on. Excuse yourself if you don’t want to read any of my disjointed rantings.

My current catchphrase is, I’m 2/3 excited and 1/3 scared shitless. This is pretty accurate. I’ve recently come across feelings of disorientation as I know this experience is going to be a culture shock for me. I’m going to be in a place I do not know, around people who are not mine (at least not at first) with my only friendly faces people I haven’t actually met in person. I know that a good portion of China speaks English, but there will still be a barrier there.

Contact informed me that white men, especially from America, tend to go a little crazy when they first get to China. They have given me examples that I can’t reveal, but the potentiality makes me a bit nervous, too. But I’ve never been typical when it comes to how I behave compared to other white men.

I’ve noticed I’ve been really frustrated with my 9-5 job. It’s a job that I’ve wanted for the past… oh… seven years or so. It’s an office job where I spend my days doing different paperwork and organizing things as well as handling the social media for the office. The whole collection of tasks is overwhelming to say the least. I almost quit last week. I’ve just gotten fed up with the whole situation.

A blessing in disguise, I’ll be going down to part time next week. 9-1. This will give me more opportunity to take care of the tasks I want to have done by the time I leave. Remember the post about lists?  Two things on my list are getting the gallery inventory sorted out so Sky can just go and grab a book if it fits onto a shelf when it isn’t full, the other gallery related list item is to catch up on all of the other books that do not have all of the information listed in the database for post on a third party site for hopeful online purchases.

Those two list items are actually the things I should be working on now, but I have no patience for them… so here I am, typing away on a Word doc. I probably won’t edit anything so if you see typos or misgrammars I apologize, but not really.

I’ve gotten everything ready for getting my passport stamped and visa acquired. My flight to China is booked. I am 99% sure I leave August 25th. I have two 6 hour layovers, one in New York and one in Beijing with a 14 hour flight between them and about 90 minute flights from Cleveland to New York and from Beijing to Nanchang. It all seems doable. I am a little nervous about the flight because last time I flew, the pressure built up in my sinuses and it felt like my head was going to explode and it was only a few hour flight from Detroit to Florida. My sinuses give me fewer issues now, so maybe I’ll be alright. At any rate, I’m probably going to bring Benadryl with me to help put me in a mini coma for the long flight. In the interim, when I am awake, I just purchased Joe Hill’s book N0S4A2 (however you spell it). I’m expecting vampires, so, of course I’m in.

In writing developments, there are none. I haven’t written anything new for Dragon’s Bane and not much poetry at all since the China trip became an idea to follow. I haven’t lost interest in the series at all, I just have so much else to do that I don’t want to get distracted from it all. I know if I started focusing on the next novel, nothing else I wanted to get done would get done. Going 9-1 five days a week with mostly free weekends will be helpful in that respect, even if I have less money to spend on necessities, like a new laptop after I pay off my passport service bills.

The last thing I’ll write about, for now, is my party July 20. It’ll be the last thing I do at Makeshift probably because they are shuttering July 31st so the (probably) last Writing Knights thing August 9th will very likely be at the gallery. I’m excited to have a multitude of people come see me on 7/20. Hopefully we will get a good turn out and a lot of fun. I’m sad as hell that Makeshift is leaving, but that will be a good send off. I want to be surrounded in the loving energy of everyone from my past and present who makes the trip out to see me. I’m also worried as hell everyone is going to “forget” or say “something came up” or they “couldn’t get a ride.” I’m also afraid I’ll end up judging the people I really want to see, but don’t get to before I go.

In closing, what would you like me to write about next?
Leave a comment here or on social media or message me on FB, Twitter or Instagram.
I’ll try to make this a more regular thing.