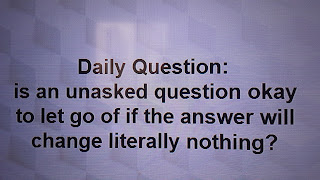 Daily Question:
is an unasked question okay
to let go of if the answer will
change literally nothing?

Friend 1: Sounds like vaguebooking but I think it's generally okay to let almost anything go if your priorities are elsewhere

Me: maybe a bit of vaguebooking, but also a legitimate question.

Friend 3: What you are describing could be aaaaaalmost anything that anyone says or does not say. But I think o get what you're asking... If you're asking it, does that mean that the answer does actually change something, even if the change is not readily identifiable? Or that the asking is the thing that would change a thing, and is the answer holder wishing for the asker to ask?

Me: of the two cases I can think of:
one the answer holder is dead so I probably can't get the answer from
them, the other is someone I recently kind of connected with, but I
don't know if asking the question would 1 get the answer or 2 trigger
memories that might damage that person's calm.

Friend 4: If you think your question might trigger bad memories, then
unless your question is more than mere morbid curiosity, don't ask it.

Friend 7: Yes.. But no matter how inane the question, the answer always changes something.
But, if it will do more harm than good, sometimes it's best to let it go.
Judgements call of the question and people involved.

Friend 1: It sounds like what you might be talking about is accepting that you are not entitled to certain kinds of knowledge, and that's very healthy. Many of us, especially straight white men, often feel entitled to knowledge of others' lives or thoughts or feelings, and learning when to mind your own business is part of becoming a better actor in the world.

Friend 8: Closure is a myth that didn't exist before 1995. I found out the hard way that sometimes you just need to write stuff off. You can't turn puss into pudding, no matter how many times you stir it.

Friend 4: Closure existed well before 1995, even as the word
"closure." Prior to that, it had other names, and still has
them. One is acceptance.

Friend 9: No it's not. Due to different variable the answer may change depending on a person's mood. You will never know if you base NOW on THEN and do not ask!

Friend 10: you cannot predict the future

Friend 11: It depends on the question and why you want to know. Sometimes asking tough questions even if it won't change things, can change the relationship between you and the person you are asking for the better. Sometimes asking that question may just lead to further pain and isolation. Some questions actually have no answer or no answer that will actually remedy the longing that is prompting the question in the first place. So I have definitely let go of some questions. One handy way I have let go of them is just by making up my own answers.

Friend 13: Never asked you will never know if it did change anything

Friend 7: After pondering this a few days. If there is something bugging your brain enough to actually form a question, it would probably be best to ask it. Just always be sure to ask the question and not accuse or shame with it.

Person 1: If you let go of expectations (the result of the question), it becomes only a question
at July 06, 2020