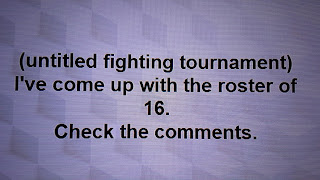 Groundskeeper Willie: A wily Scotsman and a true cleaner. He is sick of the daily grind of tending shrubs. He’s come to snip off parts of his opponents.

WeThem: A polytheist monosyllable. A chameleon-deity that can take on the most useful traits from mythology when necessary. An plural, omniverse entity. The Thesis and Antithesis.
Me: I might want a new name for this one.

Still: A character built around stillness. When not fighting they stay in constant motion. When they go still, their body changes. Not tense. Completely loose. Completely still. Devastating to the uninitiated.
Me: I think I want a new name for this one.
Friend 1: Tranquility

The Walker: A monster once bit the Walker, after five days of agonizing pain, the monster died. The Walker beat a sun in a staring contest. The Walker doesn’t cheat death. He wins fair and square. The Walker went to Mars. That’s why there are no signs of life.

GoKal: The last surviving member of an ancient and powerful race. GoKal draws power from ultraviolet radiation. He has the ability to project energy beams, fly, teleport and has nearly impervious skin and strength beyond measure.
Me: I mixed Superman and Goku for this one.
Me: I might need a new name for this one.
Friend 2: Stranger

Mister Neighbor: a mild-mannered gentleman who advocates for peace and neighborliness. A carbon fiber sweater, blade-rimmed fighting slippers. Punches faster than the eye can see.

The Glad Butcher: A meek, emotionally repressed sportsman specializing in American Football, Hockey and Golf. He wields golf clubs, hockey sticks and wears football pads. He can withstand a lot of punishment, but once he gets angry, he becomes nigh unstoppable.
Me: I might need a new name for this one.
Friend 3: Sounds a little like Casey Jones.
Me: Except Casey Jones is in no way timid haha
Friend 2: DudeBro
Me: i see DudeBros as more confident than this guy is.
Me: he's got the Bobby Boucher timid thing until you piss him off, then he goes nuts.
Friend 2: The Ref

Lurk: a combatant who can fight with energy attacks, however, only when unseen. If the eyes of the opponent can see Lurk, no damage can be dealt. Lurk can blend in with shadows.

Victoria Quietus: wearing a wide and ruffled dress and wide brimmed hat, Victoria is a trained assassin who wields two energy-sickles, able to cut through almost anything, as well as a secret poison tipped hat pin. Vainly, she takes photos of her defeated opponents with a camera she can also use to blind them.

Wu Kang: A staff-wielding monk from the planet Womb with a history of defending his race from invading world of Vulp. A strange creature, Wu Kang can project flaming square clumps of his own fecal matter at opponents. He comes to the tournament to gain help as the Vulpians are trying to upset the balance and breaching Womb’s defenses.

Goothulu: Adorable. Tiny. Monstrous. Goothulu contains multitudes and no lives matter to this elder god in the body of a human infant.

Cleric: The second choice from his planet. The first choice succumbed to an illness and Cleric was chosen as the replacement. “This is my day off,” and “I wasn’t even supposed to be here today” are some of his worries.

Dev Luceraux: A former United States Special Forces operative killed in combat, but resurrected in a secret experimental program, Anti-Corps. His original mission was defeating fascist threats, both foreign and domestic. Now his purpose is unclear, even to him and his friend, the Doctor.

Agafya Zavidnyy: from the cold outer reaches of Siberia, Russia, Agafya is a small woman with immense strength. She won many prize weapon fights with a giant log as a weapon. She was recruited by the KGB and outfitted with a suit of armor capable of a great many functions. The armor comes with a shield made of the hardest and lightest metal on Earth. She’s also been given a genetically enhanced bean which immediately renews her energy if it should ever be depleted.

Glugluch: From a race of hagfish-humanoid creatures, unevolved for the last 300 million years, Glugluch, produces a mucus-like slime that can overwhelm attackers and potentially suffocate them. Glugluch is extremely flexible and quick with an irregular, fearsome, mouth structure.

Matchman: from a species of what resembles humanoid string beans, Matchman’s species can access a pocket dimension where they can store anything, including but not limited to weapons. Matchman was chosen as a defender of the race because of his shock of long blonde hair.
Me: I might need a different name for this one.
at June 17, 2020