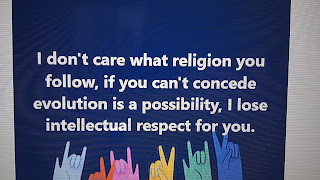 POST: I don't care what religion you follow, if you can't concede evolution is a possibility, I lose intellectual respect for you. 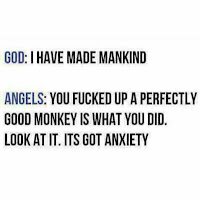 Friend 2: I talk about it all the time

Friend 3: Do you return the favor to theists? Darwin said that the theory of evolution cannot be proven credible until science proves it is possible to create life from nonliving matter. Not advocating for Creationism, just saying, those are his words.
Me: Sure. When you discount a possibility that has not been disproven you stop thinking.
Friend 3: Only if you choose to...
Me: what i am saying is, if you cement an absolute belief that can never be changed, then you close yourself off from thinking about that belief again.
Friend 3: Of course. I dont think anyone suggested otherwise.
Me: Your comment: "only if they choose to" suggests that someone could still be open to new thoughts if they were committed to a belief. I just wanted to clarify
Friend 3: Someone can still be open to new thoughts even if they are committed to a belief. People choose whether or not to close their mind to something. Thats a choice. People can also believe something very strongly but also be open to new ideas if new information was presented.

Friend 4: If you accept evolution, as currently presented, do you also accept that the octopodes are aliens, as the recent article suggests? Ackhams razor lets us choose between transgalacticpanspermia, hyper-rapid evolution of only one species, or creationism. The logical mind can eliminate the first two as less likely than the last.
Me: I feel like the evidence is compelling about octopi. I don't know enough or have done enough research to know for sure.
Friend 4: Can you clarify? You believe the evidence about octopodes is compelling in what way? You accept they must be aliens?
Me: I am open to the idea that they could be
Friend 4: So you find it more likely that octopus eggs were somehow launched into space from a distant planet, survived the rigors of space for thousands of years, then survived entry through our atmosphere and grew up to be octopodes. How is that easier to believe than creationism?
Me: Because it is statistically more likely for extraterrestrial life to exist than an omnipotent single creator.
Me: I am not even saying that a single creator is impossible, because i dont have proof it doesnt. I am just saying, with all of the galaxies around us there is more likely to be extraterrestrial life.
Friend 5: We're all aliens. If there's some alien animals, I'd 100% buy it. Now... An invisible man in the sky watching my masturbation total rise daily?! Bwahahahahaaaaa I'm not THAT crazy.