Note - I think this is a standalone chapter. Yes it would help to know some more of the backstory to JR and Maria, but basically, he is 17 and training to be in the Human army. Maria was one of his friends from the fort, but she was injured. The novel itself is set in an alternate reality from the one we live in, but I think you'll get that.

Join the adventures of John Ross Gerstung as he battles Dragons and Humans in the Supremacy War!
Buy Sunset Red Now! 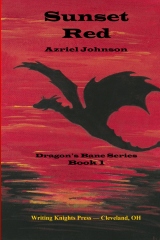