This story contains gross stuff, read at your own risk.
This is also a first draft and I'll probably not fix anything that isn't glaringly atrocious.

Before I begin, it should be noted that I was diagnosed diabetic in 2016.

Before this diagnosis, I was falling asleep while driving, also while at work (during working hours, not just during lunch breaks). I would fall asleep after eating meals too large and too full of simple carbs and sugars. I come from a family with a predisposition towards diabetes, but I resisted diagnosis largely because of money concerns and fear.

I took a trip to the 2016 National Poetry Slam and through the week I felt progressively weaker and misdiagnosed myself, thinking that caffeine would help me, but drank overly sugary drinks and pissed far too much as well as started falling asleep on the 10ish hour drive home.

Once I was diagnosed, I took sugar seriously. My highest sugar was 350. I was prescribed metformin and I also implemented cinnamon as a natural blood sugar regulator as well as other methods to bring my sugar down naturally. I also took on a low carb diet with increased exercise. Within 18 months (January 2018), my blood sugar was in normal ratios. My A1C was in healthy ranges not only for diabetics, but for “normal” folk.

Also, it should be noted, the metformin possibly started causing me lower digestive problems which may have increased a hemorrhoid problem which became prevalent in my last six months in the US (that and I used to spend an inordinate amount of time sitting on the toilet whether I was shitting or not). There was blood towards the end, but not a lot.

I kept up with low carb until I came to China. When I came here I wanted to indulge. I wanted to taste everything China had to offer and for a while I was fine. I was exercising fairly regularly. I thought I would be fine.

The hemorrhoid issue never really went away, but it did die down a bit at first. Then it came back with more blood than before, around January 2020 (just before Skylark came to visit me). I saw a TCM (Traditional Chinese Medicine) doctor for a remedy which worked pretty well at first.

I finished the medicine and I thought that would be it. But a couple months after, the blood and discomfort returned. This time the TCM treatment was not as effective. I knew something had to change. I tried a change in eating habits, but it was too far gone and there frequently was blood in my stool or on the paper when I wiped. I tried to increase my exercise, even exercises specifically targeted to the lower digestive tract, but there was only temporary and limited success.

Finally, after some grunting and straining, there was a great deal of blood in a bowel movement and I had to contact my boss and let him know I wanted to get checked out. In October 2020, I went to the doctor for a check up and they confirmed, not only that it was hemorrhoids, but that surgery was the only option for it to be healed completely.

I started making mental and fiscal preparations to afford an expensive surgery that would happen over the winter vacation (January 2021). The bleeding got so bad at one point that I had to cancel a trip I’d booked for Wuhan (they were a safe zone from COVID by then).

The Fall 2020 semester was kind of stressful for reasons I won’t get into here (but maybe later). I tried to keep a positive attitude. Unfortunately, the way I did that was comfort feeding. Yeah, this meant a lot of carb foods to “make me happy.” I tried to offset this with drinking diet soda, thinking the caffeine and lack of sugar would help keep a balance.

Unfortunately, I started getting dizzy whenever I would stand up or change positions. I don’t know if it was related to blood loss from the hemorrhoids or the aspartame in the sodas, but I needed to make a change. I switched from the sodas to bottled tea with not a great deal of sugar, but not zero sugar. I also started allowing myself to drink fruit juices, which on the surface seem healthier… but they (more often than not) are also packed with sugar.

I started becoming more and more lethargic. I attributed this to depression and stress. My toilet started smelling sickly sweet. I started feeling thirsty constantly. My mouth felt dry all the time, unless I had something in my mouth to make my saliva work. I was drinking a lot to counteract the dryness and thirst and it wasn’t working, but I WAS peeing a lot. Thankfully there were no long drives to make it through.


At last, the end of the semester came. My exhausted self was finally ready to be rid of the hemorrhoid problem. I had the money to pay for the surgery. The process began with a health check. Everything scanned normal until they took blood.

It was intended that I would stay in the hospital for 7-10 days to recover from the surgery, but I ended up staying in the hospital for two days and one night to try to treat the high blood sugar. I realized that I wasn’t going to get the surgery and it was just going to cost me so much more than the initial surgery, so I opted to treat it at home.

When I was first diagnosed diabetic, my body was ALL fucked up. I had been so bad off that my kidneys were actually damaged and spilling protein (I don’t know if they were spilling it, but that’s how my Doc made it seem). Kidney damage is no joke, it can actually be fatal. When I started getting my shit together (and proper meds) I was able to repair the kidneys over time.

This time, thankfully, there was no damage to my kidneys and all of my other metrics were normal, this time it was just my blood sugar and A1C were too high. FAR too high. My high before was 350. China measures blood sugar differently, but the conversion was 428 (it actually ended up going higher during my hospital stay, but I don't count that, I'm not sure the doctors knew what to do with actual diabetes, they were suggesting I eat rice and bread).

If you didn’t know, if you have surgery with high blood sugar it can lead to blood clots which can be dangerous, even fatal. No way I want to die from complications related to hemorrhoids. So the surgery had to be postponed due to my high blood sugar.

When I realized this, I felt ashamed. I thought I was doing okay. I didn’t feel like my sugar was out of whack, but I realized after I thought about it (and as I type this), the lethargy, the thirst, the dehydration it all makes sense.

So, I have to get myself back on track. I can still indulge in the Chinese cuisine, I just have to make sure I avoid simple carbs (rice, noodles, a lot of snack foods) or if I do have these things, I have to eat them in small, easily manageable quantities.

It’ll be a little harder to do here because Chinese nutrition charts are… you know… in Chinese. Also, they determine the daily values of things by 100 grams or liters so I’ll have to do the math myself. Thankfully, I’m good enough at math (for a poet) that I can figure these things out easily enough. 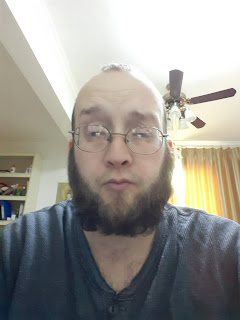 So this is me, standing against the wave of diabetes with a low carb diet in one hand and hemorrhoid symptom treatments in the other about to wage war with myself, again. I’ve got to stay focused and disciplined. I know I can get myself back under control. I can do it! I can win!

Thanks for reading!
Azriel Johnson

PS – If you’re facing similar or not similar challenges and want someone to talk to, feel free to contact me on social media.
Facebook.com/azrieljohnsonauthor
Twitter: @AzrielJohnson
Instagram: @azrieltobiasjohnson
at January 10, 2021